Fiemme, known as the ‘Ombelico del Fondo’, has hosted three FIS Nordic Ski World Championships (1991-2003-2013), hundreds of Nordic Ski World Cups, 13 editions of the Tour De Ski, 46 editions of the legendary Marcialonga, the Skiroll World Cup and for the youngsters the Skiri Trophy (formerly the Topolino Trophy), the Universiade (2013), the FIS Nordic Junior and Under-23 World Ski Championships (2014).

A candidate for the 2026 Winter Olympic Games as the location for the Nordic disciplines, Val di Fiemme will find out whether they have been successful on Monday, June 24th, at 6.00 pm.

AMONG THE MUSICAL TREES

The Val di Fiemme extends between the Trentino Dolomites and is surrounded by two natural parks: Paneveggio Pale di San Martino, with its deer reserve, and Monte Corno, with its rare species of birds.

Its dolomitic peaks are among the most photographed in the world. Winding paths weave through the landscapes of the Latemar, the oldest of the Dolomite groups, or the Corno Bianco, a perfect observation point for the most spectacular sunsets. Others lead to the wild peaks and alpine lakes of the Lagorai chain.

Val di Fiemme is called “The Valley of Harmony” for its resonant fir forests, the wood of which is used to create pianos and violins, once appreciated by Stradivari and now sought after by luthiers all over the globe.

The woods of the Val di Fiemme are well maintained thanks to the Magnifica Comunità di Fiemme which carefully manages thirty thousand hectares of fir forests.

This Trentino valley runs on two wheels, between Dolomite hills and e-bike excursions. You actually cycle between the “pink” routes of the Giro d’Italia, a 50 km long cycle path, Dolomite passes and forest roads. 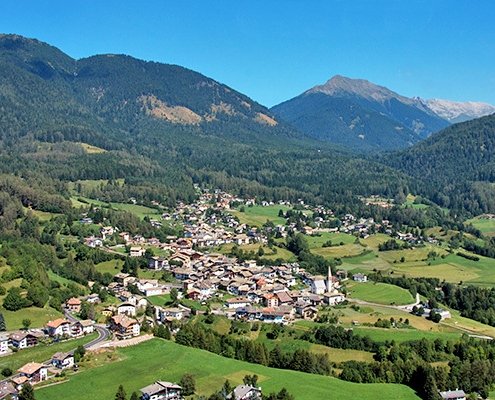 In Val di Fiemme you have the choice of staying in one of fifteen characteristic towns, divided into eleven municipalities. Among the most astonishing of the Dolomite territories, it has been attracting tourists from all over the world for over a century due to its natural beauty and its vocation for sport.